Chan Chan was the capital of the pre-Columbian Chimú Empire and was located on the peruvian pacific coast, west of today’s Trujillo.

It was built around 1300 and still extends over an area of ​​28 km². It was probably the largest city of the time in South America Continent and one of the largest in the world, built of clay. At its height, the city hosted about 60,000 inhabitants and had a handsome fortune amassed in gold, silver and ceramic artifacts.

Chan Chan could not be defeated by the Incas by military force. Therefore, the attackers diverted the river flowing through the oasis, so that the ingestion the city was made possible by the soon occurring water shortage. 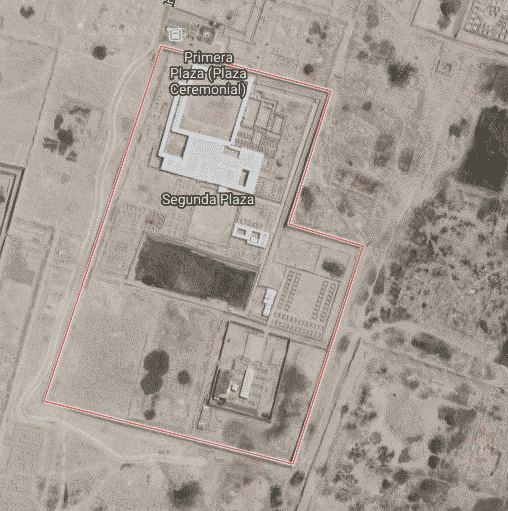 After the Inca conquest, the city lost its importance. The city was not destroyed by them because they put more emphasis on expansion than wealth. But that changed abruptly when the spaniards conquered the inca empire. There was not much left of the Chimú culture. Today only more huge areas of mud buildings and some ballrooms, in more or less bad condition available.

Massive destruction is also caused by El Niño, which has appeared in recent years. For decades, there has been no rainfall in this area, but climate change is making the weather phenomenon increasingly fierce and changing the desert-like coastal areas.

The capital of Chimú, around 850 before Chr, by 1470 it had its heyday, consisting of originally nine autonomous districts, each ruled by another successful ruler. They were worshiped like kings. Each district contained tombs with extensive additions of jewels, ceramics, and dozens of skeletons of young women.

The city of clay covers an area of about 28 km ², but was much more extensive in the early days. Chan Chan is said to have been one of the most sprawling urban areas in South America during its heyday. At the same time, Chan Chan was the largest clay-built city in the world. During the cultural peak around the 15th century, Chan Chan had up to 60,000 inhabitants. Many of them were extremely wealthy. Between the earthworks most valuable riches of precious metals were stored.

The best preserved is the Tschudi area, named after the Swiss researcher Johann Jakob von Tschudi. This area is being restored and is open to tourists. Here are some of the ballrooms with their magnificent ornaments to see. Until 1998, the mud buildings were provided with a special glaze to protect them from destruction by precipitation. But in the year El Niño was so heavy that steel scaffolding had to be built so that the small buildings are not washed away.

UNESCO declared Chan Chan a World Heritage Site in 1986. At the same time, the ruins were added to the Red List of Endangered World Heritage due to the growing damage caused by climate change. Currently, the rise of groundwater and illegal settlements on the site of the site are causing problems.

If you are traveling in Peru and driving north along the Pacific coast, you must make a detour to Chan Chan, located about five kilometers west of the city of Trujillo. Because of the impressive craftsmanship that is reflected in the history-rich architecture of the plant, worth a visit to this huge facility.

Daily departures at a time we go to arrange with you.

Depends on your schedule.