Fortress of the Cloud Warriors

Kuelap is a former fortress of Chachapoya and a village. They are high above the valley of the Utcubamba River, near Chachapoyas, Luya Province, in the northern peruvian andes. The village of Kuelap, which belongs to the district of Tingo, is located at about 2900 m above sea level, just below the fortress.

The fortress stands on a ridge and housed over 300 individual houses on its three levels. Archaeologists are not entirely sure whether the fortress was a permanently inhabited village or the inhabitants of the surrounding villages retreated there only in an emergency. They refer to the surrounding area as having the highest density of undiscovered and unexplored “places of historical interest” in South America.

At the beginning of 2017, a cable car was opened, leading shortly after the village of Nuevo Tingo to the entrance area, making the site much easier to access.

Kuelap Fortress was built between 800 and 1300 a.Chr., and is older and larger than Machu Picchu. For the construction of the fortress a total of 25,000,000 m³ of material was processed. That’s three times as much as the Pyramid of Cheops in Egypt. Kuelap was built by the Chachapoyas, who ruled the Ragion before the Inca conquest. Incidentally, in Quechua (the ancient language of the Inca) Chachapoyas means “the cloud people”.

The fortress was rediscovered in 1843 and is considered to be the largest building in South America. Even for the Inca Kuelap was impregnable until 1475, because the Chachapoyas were a proud and powerful warrior people. At the sight of the huge impressive walls, you can imagine yourself even better. The fortress is strategically located on the ridges, the valley can be easily overlooked.

After 20 minutes you reach after a short bus ride from Nuevo Tingo to the valley station of the cable car. Then it’s about 20 minutes with the cabin gondola up to the mountain station hinau. From there, it then leads a pleasant hiking trail to the fortress walls of the southern front of the fort of Kuelap. The massive complex was built by the Chachapoyas on the massive ridge at more than 3,000 meters altitude, so high above the clouds. Depending on the weather and season, you will get a ride on the gondola through the cloud cover and then enjoy a magnificent view from above. The walls of limestone and sandstone reach a height of up to 21 meters, the entire fortress structure has a north-south extension of about 600 meters. In east-west direction, the maximum dimension is 110 meters. The sight of the overgrown and mighty walls is fascinating, as well as the view of the valley and the surrounding peaks of the eastern cordillera.

Until recently, very few tourists to the north of Peru. The road to Chachapoyas is relatively long by car and takes a few days. We ourselves carry out our tours through the north with small groups to have enough time for these wonderful places and to learn more about them.

The structure of the fortress 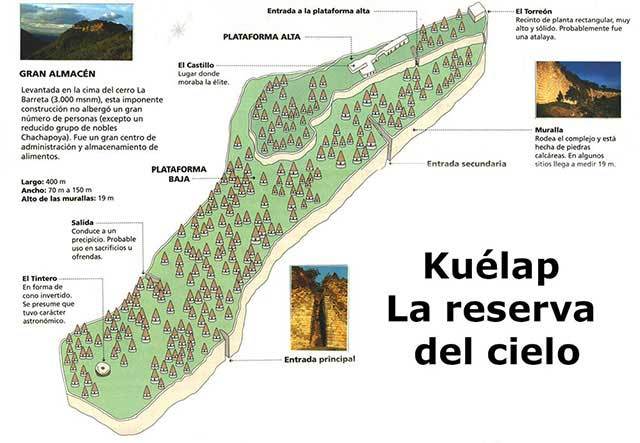 The fortress was built by the Chachapoya, whose culture existed in the period from 900 to about 1400, and could accommodate up to 300,000 people. It was rediscovered in 1843 by Don Juan Crisóstomo Nieto, a judge from Chachapoyas. The ruin complex is 580 meters long in the north-south extension, and the largest width in the east-west direction is 110 meters. In places where there is not already a very steep slope, it is secured with a wall up to 21 meters high. Entry is only possible through one of the three high but extremely narrow entrances, through which, for strategic reasons, only one person can ever enter. The main entrance is constructed in such a way that if an enemy does penetrate, it can be thrown out directly to the exit, which is directly opposite.

The various levels of the fortress were home to different social classes, as evidenced by the decoration of the houses with typical Chachapoyas elements and patterns. The nobility probably lived on the top level, the “Castillo”; The “upper village” was inhabited by members of the military. In the “lower village” there are simple houses, often basement. The structure of the division of the room with kitchen and millstone is still clearly visible in some places. In the middle of the fortress is also a quadrangular house, which probably dates back to the incas, since the Chachapoya have traditionally built their houses around. It is believed to have been used for meetings of the highest social class.

The interior looks like a bewitched garden from a fairy tale. Much is wildly overgrown by the lush vegetation, which is still well promoted here by the mountain fog. Some trees are mamut-like between rocks and stones and are largely overgrown with bromeliads.

The place is very mystical even by the dense cloud cover. The mountain fortress with its charisma Machu Picchu is in no way inferior. Kuelap is a lot bigger and higher, as well as older than Machu Picchu. 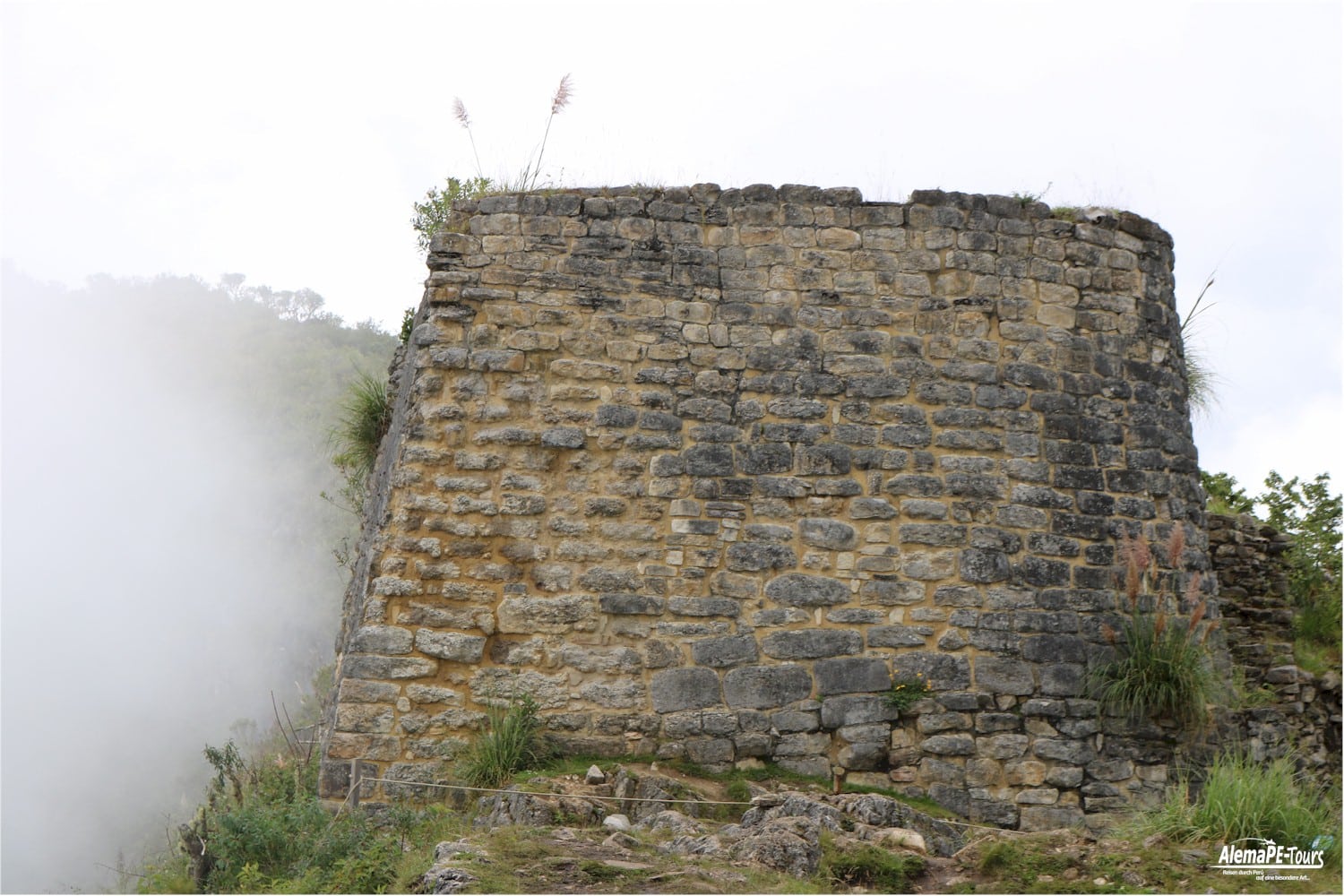 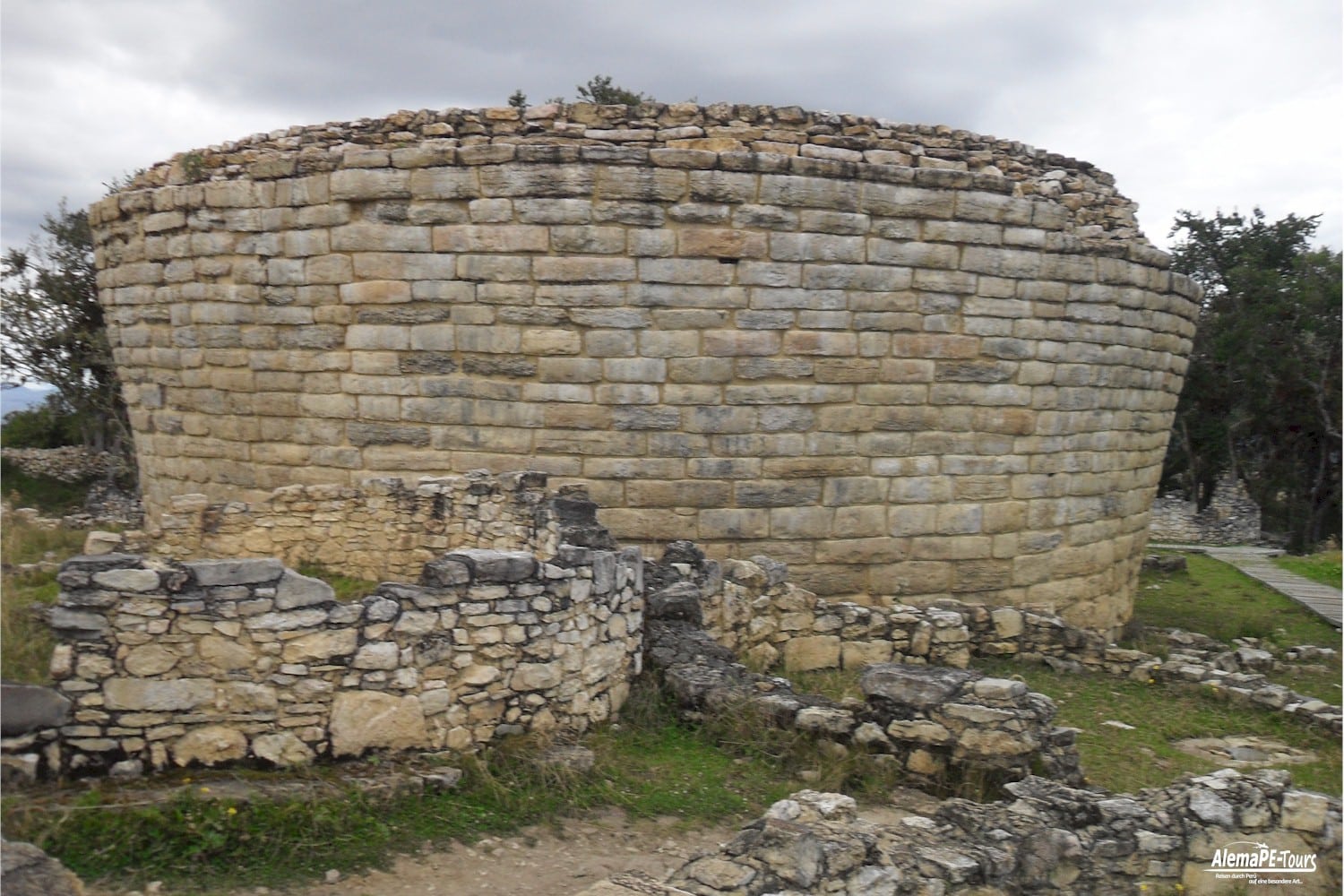 El Tintero, the inkwell in english, is one of the great mysteries of Kuelap, as no one can say for sure what he served. The building is so named because it resembles an inkwell that tapers from top to bottom. How the construction came about is not yet clear. In the meantime, it has to be supported by many sides so as not to collapse. Inside the “Tintero” bones of predators were found. There are numerous theories for what it could have served. Some say it was used for torture, prison or capital punishment, others consider it an observatory because the light rays from some cracks meet in the middle on certain important days.

Since Kuelap is not as famous as Machu Picchu, the funds flow only sparsely. The construction workers and archaeologists of the INC (“National Institute of Culture”), who are responsible for the restoration of the fortress, probably work with the same means as the Chachapoya, namely with wooden scaffolding and muscular strength; There is no electricity in the village of Kuelap. The house of archaeologists has a generator, but the water supply is also not very reliable. The road ends about a kilometer before the fortress in the “Malca”, just after the village of Quisango. From there you can only walk or mule to Kuelap. 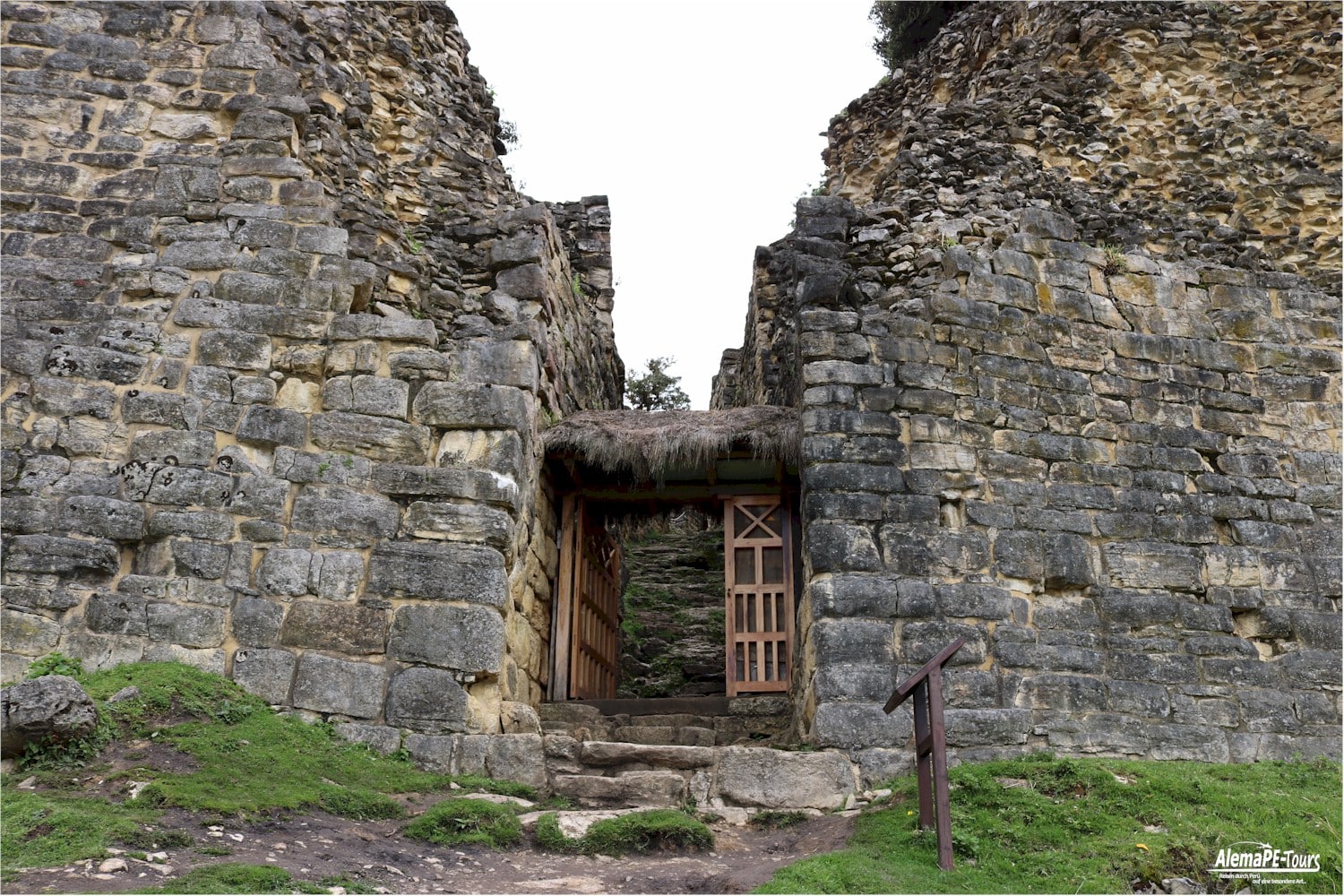 The fortress has a total of three high and extremely narrow entrances, these can be committed by a maximum of one person. The main entrance is directly opposite the exit, intruders were probably thrown right back on the opposite side.

An unforgettable journey for those who want to go beyond the Incas and discover their predecessors, the Moche, Chimú and Chachapoya. These cultures developed in northern Peru. After getting to know this part of the country, your experience of Peru will be greatly enhanced. Afterwards, you can explore other points in the south of Peru, where more relics from the Inca period are awaiting you, or even a beach holiday on the beautiful sandy beaches of the northern coast in Máncora or Punta Sal. 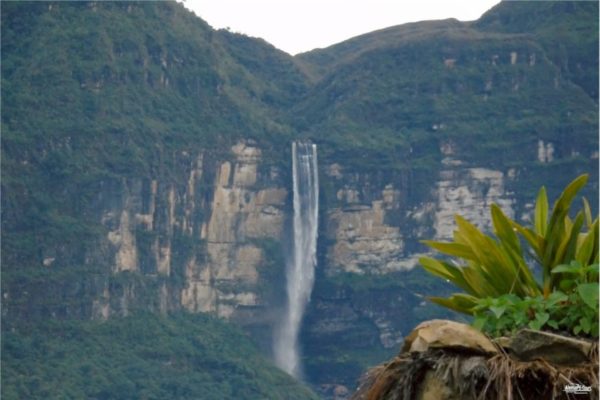