Hundreds of foreign tourists who were stranded in Peru, after the closing of the borders in force since early Tuesday morning, began to be evacuated from cities such as Cusco and Lima to their respective countries of origin, on commercial flights which, in return, also brought Peruvian citizens back to the country.

It should be noted that these operations were coordinated by the Ministry of Foreign Affairs and the Ministry of Transport and Communications (MTC), at the request of various embassies, within the framework of Supreme Decree No. 045-2020-PCM, which authorizes the General Directorate of Civil Aviation (DGAC) to authorize, on an exceptional basis, the national and international flights necessary to facilitate the repatriation of Peruvian nationals to national territory and of foreigners to their respective countries of residence.

The odyssey of these travelers began on Tuesday with the arrival in Lima of 138 nationals from Miami, United States, in flight of Latam Airlines. Among the passengers were people in an emergency situation who did not have air tickets and needed to return to the country, so they were given support by transporting them free of charge.

Yesterday, repatriation flights were also made to and from our country. At 10:30 a.m. a Latam Airlines plane from Santiago de Chile arrived at Jorge Chavez International Airport with hundreds of Peruvians on board and at noon that plane departed back with 221 passengers who remained isolated in Peru, of which 190 were Chileans.

The Mexican airline Interjet made two humanitarian flights yesterday which were coordinated by the authorities of both countries. The first arrived in Lima at 6:19 p.m. and left for Mexico City at 7 p.m., while the second arrived in our capital at 8 p.m. and took off an hour later for Cancun.

In total, about 300 Peruvians were repatriated from Mexico and a similar number of foreign citizens were evacuated, most of them Mexicans with airline tickets. There was also a Star Peru charter flight to Port-au-Prince, the capital of Haiti.

“We are going to repatriate Peruvians who are in Mexico and we are going to return Mexican citizens to their country. We are making an exception to the rule (of closing borders) to protect the lives and health of people who were stranded outside their countries,” said Transport and Communications Minister Carlos Lozada. 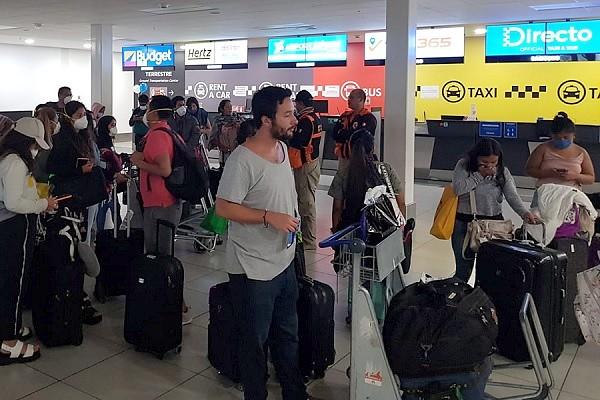 The largest number of humanitarian air support operations is planned for today, mainly focused on the evacuation of hundreds of foreign tourists, including Israelis, Spaniards, Argentines, Chileans, Mexicans and others, who were trapped in Cusco after flights were suspended due to the coronavirus emergency.

Meanwhile, a large number of foreign tourists who are still in Lima will be evacuated in eight commercial flights, these are Latam Airlines to Santiago (10 a.m.), Latam Airlines to Miami (10 a.m.), Aeromexico to Mexico City (3:55 p.m.) and five EL AL flights to Tel Aviv scheduled between 12:30 p.m. and 4:30 p.m., according to the itinerary published on the Lima Airport Partners (LAP) website.

Although there is no official information yet, more humanitarian support flights are expected in the coming days. For the time being, Chilean authorities have announced that this Friday they will carry out a joint repatriation operation with Latam Airlines, Sky and JetSmart, which will allow those Chileans or foreigners residing in Chile who have tickets on one of these airlines to return.