The Decentralized Cultural Directorate of Cusco (DDCC) blamed the National Service of Natural Areas Protected by the State (Sernanp) for the yellow pints that appeared on a stretch of the Inca Trail, which generated controversy on social networks because it is a heritage site. This fact also revealed a certain lack of coordination between the two entities in charge of guarding Machu Picchu Historic Sanctuary.

In a press release, the DDCC clarified that they did not know about or approve the signaling test for the road from the bridge to Chachabamba’s control post, on Route 5 of the Inca Trail Network, conducted by Sernanp. He said that the paint on the stone road generates a strong visual impact.

In fact, days before Sernanp published the following message on its Facebook page: “The Historic Sanctuary of Machu Picchu is preparing to receive its next visitors,” accompanied by photographs that showed the signage with yellow paint, as part of the biosecurity measures implemented before the next reactivation of tourist visits. When the scandal broke, the institution removed the images.

Immediately afterwards, the DDCC disclaimed any responsibility for this act. “Even though this road is not of pre-Hispanic origin but a modern facility, such signaling with paint on the stone road generates a strong visual impact that should be replaced by another type of signage, which is provided for in the normative documents of management and conservation of the Historic Sanctuary of Machu Picchu – National Archaeological Park of Machu Picchu,” said the Cusco cultural entity.

For his part, Sernanp Cusco director Ernesto Escalante reported that the yellow paint was removed to verify the most appropriate procedures regarding biosecurity measures in the protected area. “The first recommendation is to use visible signs so that visitors do not say that it is not noticed. We have already removed the previous signage; we are going to try another type,” the official told RPP. 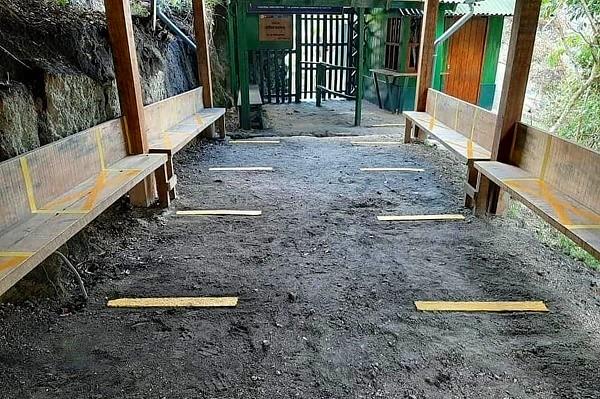